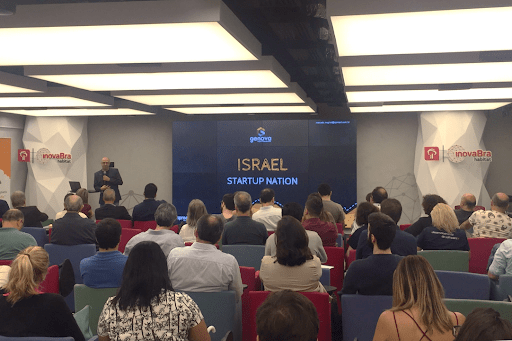 “Who will truly transform Brazil’s startups ecosystem is the entrepreneur”, that’s how Alex Granjeiro, Director of Genova, opened the first edition of Genova Talks. The event – held at Habitat, a coworking office conceived by InovaBra in partnership with WeWork – was developed with the objective of collaborating with the national entrepreneurship evolution and promoting the exchange of knowledge between startups, investors, accelerators and stakeholders.

“Israel Startup Nation: The Israeli Entrepreneurship Ecosystem”, lecture given by Marcelo Negrini, Spread Director of Digital Transformation, presented the country’s history as an important innovation development center and was followed by a round table composed by José Alberto Bouça, Spread COO; and Samsão Woiler, Genova’s mentor. Focusing on knowledge sharing, Negrini spoke about initiatives, startups and novelties that started in the country, one of the world’s leading ecosystems according to the 2017 Startup Genome study, which puts Tel Aviv in sixth place in global ranking.
“Israel is smaller than the state of Sergipe, recognized only in 1947, but full of history. The first board of the Hebrew University of Jerusalem, for example, was composed by Albert Einstein, Sigmund Freud and other relevant names to the innovation and development of our society,” said the executive during presentation. According to him, stimulate the mentality and the entrepreneurial culture in people is a millenarian tradition much valued by population and government.

With a model based on scalability, several disruptive businesses were created on Israeli soil, including applications present in people’s lives around the world, such as Waze. “Israel is a learning pole and must be recognized by entrepreneurs as a reference. For example, São Paulo doesn’t even figure among the top 20 entrepreneurship centers in the world today, despite having potential even in the midst of crisis and lack of investment. If Brazilian entrepreneurs had this scalable vision and the goal to reach at least Latin America, we would see a great bubble of growth of this ecosystem around here,” said Negrini.

During the round table, executives discussed with the audience the importance of building a bridge between Israel and Brazil in order to provide an exchange of knowledge. According to Bouça, the relationship between the countries can be an essential way to develop entrepreneurship and make products and services no longer just good insights, but actual solutions available worldwide. “The role of Genova and events like this is to create centers similar to those found in Israel so Brazilian initiatives can be expanded, as well as allowing technologies and innovations created in other countries to arrive here,” adds Spread COO.

* Mônica Miliatti is a journalist at essense, the agency responsible for Spread’s content strategy